A birching in the presence of witnesses, illustration by Louis Malteste.

A witness is someone who sees an event, a spectator. 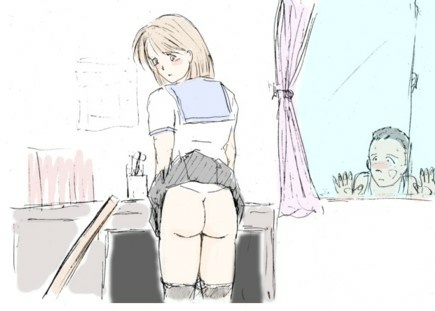 In spanking, a witness is any person who is present and passively watches the spanking without being directly involved in the spanking (i.e. not the spanker, the spankee, or an assisting person).

Examples of such persons:

The emotional reaction of witnesses can be very individual: they may feel compassion with the punished person, but they may also feel Schadenfreude or may not be emotionally involved at all. The reactions of witnesses, in turn, may have an effect on the spanker and/or spankee, and so witnesses do play an important role even when they are not actively involved. This role of witnesses is often elaborated in spanking stories, spanking drawings and spanking videos.

The presence of witnesses during the punishment can reassure the spankee, but can also increase the shame and embarrassment felt. How the the witnesses relates to the spankee might change whether or not the spanking is considered 'private' or 'public'. Some will count anyone who are not the spanker renders it public, others count family members keeps it family business, hence still private, others will draw the line even finer, with either immediate or extended family, or even guardians vs siblings.

Sometimes if the offense being punished involves a third person, the victim of the offense might be permitted, invited, or encouraged to watch the punishment — for example, the person from whom something had been stolen.