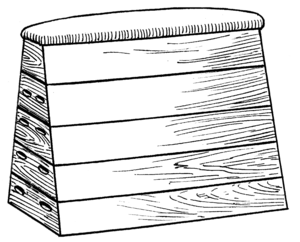 Drawing of a vaulting box

A vaulting box is a gymnastics apparatus, similar to a vaulting horse, but with a flat rectangular padded top and an overall box shape instead of legs.

Vaulting boxes are generally made as a stack of several wooden pieces. Their height can be adjusted by adding or removing a desired number of pieces. There are two main forms: straight and trapezoid. For straight vaulting boxes, the pieces can be removed and added anywhere in between the foot end and the top. For trapezoid vaulting boxes, the pieces can be removed and added at the bottom only, as they are all of different sizes and must remain in order. For this reason they are also often numbered, starting with "1" from the top. This adjustable feature makes vaulting boxes preferable equipment for school PE classes over competition vaulting horses.

The vaulting box was invented by the Swedish physical therapist Pehr Henrik Ling (1776-1839), who is the founder of Swedish gymnastics and the father of modern Swedish Massage.

Vaulting boxes can be used as an item of spanking furniture, for example for the bent-over-object position, half-standing position, lying position or upside-down L position. Due to their flat tops, vaulting boxes of regular size are not well suited for straddling. However there are also small-sized vaulting boxes of foamy material that could be suitable for that.