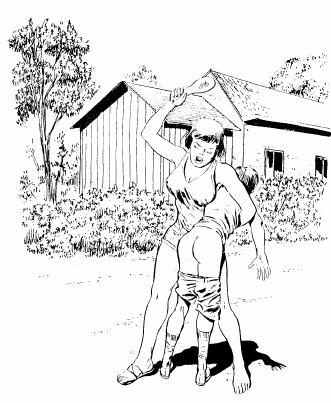 The underarm position is a spanking position in which the spankee is either standing or hanging (off the floor) and the spanker reaches around the spankee's waist with his/her non-spanking arm in such a way that the spankee is firmly tucked under while their buttocks are turned to the front to be spanked.

Underarm position, spankee off the floor[edit]

This leaves the spankee quite helpless but is trying for the spanker, who has to carry the spankee's entire weight in one arm. It's therefore probably suitable only for spankings of short duration.

This position can also lead to the more comfortable (for the spanker) over-one-knee position if there is some support for the spanker's left foot available, such as a chair, stool, or a step of stairs.

Underarm position, spankee on the arm[edit]

In this variant, the spankee, which again has to be very lightweight (such as a small child), is carried on top of one arm.

The "underarm grip" in the kneeling position.

Many other positions are similar in that the spanker reaches around the spankee's waist to hold the spankee firmly in position. For example, this grip is common or possible in the: