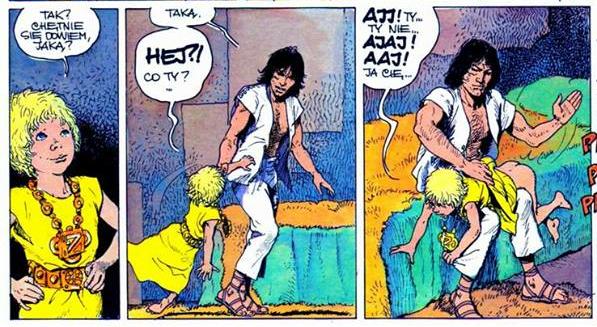 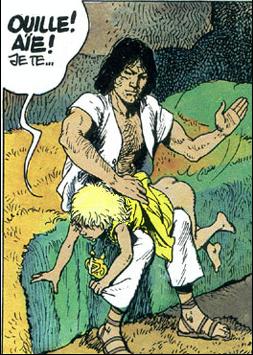 Comics in the first half of the 20th century featured a lot of humorous spanking scenes as these were extremely popular both among children and adult readers. The 1920s to 1970s can be called the "golden age of spanking in comics".

Some comics had hardly any stories that did not contain, (or often, end with) a panel that showed a spanking. Amongst the best known and longest running examples were The Katzenjammer Kids. Usually the spankees in these comics were actually the heroes of the comic, the respective child protagonists who got more or less regularly spanked for their pranks by their parents or guardians (Buster Brown, Little Iodine). Other comics featured no spankings of the protagonists but occasionally of minor characters (Nemo in Slumberland, Popeye (example)).

It may be argued that the interwar decades marked the evolution of modern comic spanking imagery. It was during this period that the distinction between generational spanking (adult vs child) and gendered spanking (Man vs Woman) became more clearly defined.

The so-called "golden age of spanking" coincides closely with the rise of comics as a mass industry, signaled by the debut of Action Comics number one in June, 1938. By the end of the thirties, spanking was a well established tradition within the comics milleau...

In a similar way to what happened to the spanking cartoon, spanking imagery began to vanish from mainstream comics during the 1970s and 1980s. This apparent decline may be attributed to a number of far reaching social and cultural changes which took place at the beginning of the seventies ...

Following the digital revolution of the 1990s, modern contemporary artists have begun to create a new genre of spanking comics, i.e. comics that are as tightly focused on the spanking theme as spanking stories are...