From Spanking Art
Jump to navigationJump to search
Demonstration of school spanking (in Dutch).

Illustration by an unknown artist.

School corporal punishment is corporal punishment inflicted on a student in a school situation, generally for misbehavior or violation of school rules, or for failing to learn lessons well enough to satisfy the teacher. Teachers have employed corporal punishment from earliest known schools until comparatively recently. However, in the mid to late twentieth century, many countries legally prohibited corporal punishment in schools, and in many places where it is still legal it became quite rare. It is now common in only a few countries, including parts of Asia and Africa, and some regions of the United States.

Traditionally teachers are expected by society to fulfil an in loco parentis role; i.e. they should educate the children not only in knowledge but also in good behavior. Teachers were permitted and expected to punish children under their supervision who showed undesirable or unacceptable behavior such as laziness, inattentiveness, rudeness or disobedience.

Medieval school scene, from a carving on a misericord in Sherborne Minster, England.

A tardy student waits to learn what his punishment will be. A birch and dunce cap are waiting.

Descriptions of school corporal punishment are known from practically all ancient cultures that had schooling systems and writing, such as the Sumerians, ancient Egypt, ancient Greece, the Roman Empire, and ancient China.

Practically all schools in the European Middle Ages were convent schools. In medieval and Renaissance European schools, corporal punishment played such a vital role that the birch became the emblem and symbol of the teaching profession. In Germany, the annual cutting of rods for the teacher developed into festivities called Rutenfest. Some convent schools had special punishment days called Streichtage in German.

Johannes Butzbach (1477-1516) gives in his autobiography an example of overly harsh corporal punishment he suffered at school.

Even the children of highest royalty were not excempted from corporal punishment. For example Jean Héroard, doctor of medicine and the main witness of the childhood of Louis XIII of France (1601–1643), wrote in his diary about the prince:

In England, the traditional forms of corporal punishment in schools were the switch, the birch, and the cane. In Ireland, implements such as the Irish school strap were used. In Scotland, the tawse was commonly used. In the United States the paddle was perhaps most common, followed by the switch and the ruler. But there was much regional and local variation in implements and methods of school punishment. Sometimes teachers would use a blackboard pointer for cp. An example of the methods and frequency of typical school corporal punishment in 18th century Germany is given in the account of Johann Häberle.

In addition to various forms of spanking and striking the hand, school punishments typically included scolding, writing lines, restriction, corner time, log kneeling, and various forms of humiliation, such as the wearing of a dunce cap or donkey cap.

World map of the legal status of parental, school and judicial (including prison) corporal punishment.

Note: for some countries, the above list and the map do not correspond (e.g. Australia, France). These cases need clarification. It could be that school corporal punishment is no longer practised in these countries but there is no national-level ban. 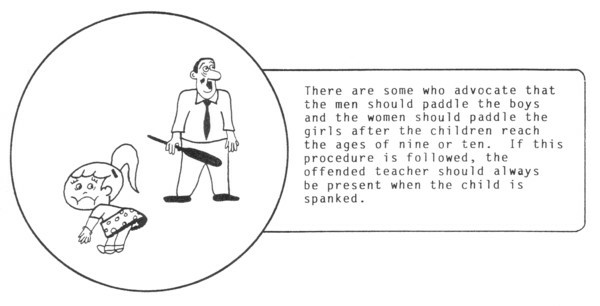 Worldwide, the most common form of school corporal punishment seems to be striking the student with a designated object, on their hands, head, buttocks or other body parts. Making a student assume a tiring, uncomfortable pose for a period of time is also popular.

More formal and more severe forms of school corporal punishment are sometimes reserved for the headmaster to administer.

Corporal punishment has often been depicted in fiction set in a school or involving schoolchildren. Perhaps the classic scenes of English school punishments are to be found in Tom Brown's School Days. Mark Twain's famous novel Tom Sawyer has several scenes of school punishment, including the much quoted scene where Tom saves Beccy Thatcher from a whipping by falsely confessing to her misdeed. (This has been re-written by Handprince as "If Tom Hadn't been noble", in which Tom fails to intervene and Becky is duly thrashed.)

One of the finest scenes of corporal punishment in fiction appears in Charlotte Brontë's novel Jane Eyre, the whipping of the fourteen-year-old schoolgirl Helen Burns.