Woman pulling her denim shorts down. 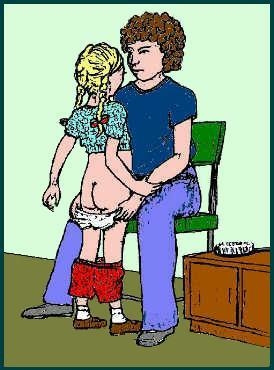 Pants down is a state in which a person's pants are unfastened and taken down, but not taken off. The pants are just pulled down to expose the buttocks and remain on the person's legs. This is usually done for toilet use, for punishment in the form of a spanking, or occasionally in other situations where access to the buttocks is necessary but full nudity isn't, such as giving an injection.

There is room for variety in how far the pants are taken down, e.g. just in the back to sitspot height, to knee height (at "half-mast") or as far down as possible, to the ankles. In the latter case, the pants bunched around the ankles will make kicking the legs difficult, which may be a desirable side-effect.

The same that can be done with pants can also be done with shorts and with underwear. In the latter case, the spanking is given on the bare bottom. However the underwear can also remain in place, resulting in a spanking on the briefs or panties.

Many spankers, spankees and spanking art enthusiasts find that a state of partial nudity, as in pants down, can be more thrilling than full nudity. This is probably because the bareness is contrasted, and thus emphasized, by the fact that the rest of the spankee's body remains clothed.

A pants-down scene also avoids sexual/erotic connotations that may come up when the spankee is fully naked. It stresses the fact that the partial nudity is only for a disciplinary purpose.