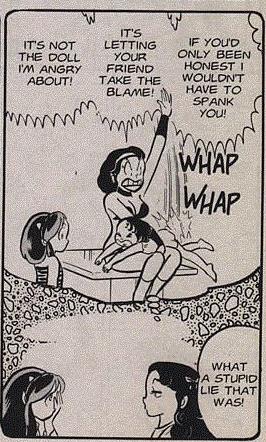 Clinton gets a caning. By Marilla Thackery (2018).

A lie is a statement made in the intention to trick a hearer into believing something false. The act of saying or writing a lie is called lying. A person who lies is called a liar.

(Note that the English words "to lie" and "lying" also have another completely different meaning: to rest one's body in a horizontal position. See lying position.)

Usually, lies are untrue statements, but a lie may also be true: this can be the case when the speaker/writer is mistaken in believing it to be untrue. Still, for most practical purposes, lying can be equated to "deliberately speaking the untruth".

A lie can be as short as a single word (e.g. "yes") or as long as a detailed made-up story. The term "lie" implies that the person claims it to be true. Fictions (e.g. novels) are not lies because they are made without the claim of truth.

Types of lies include:

Lying can have various reasons and intentions, such as:

Thomas Aquinas divided lies into three kinds: the useful, the humorous and the malicious. All are sinful according to Aquinas. Humorous and useful lies, however, are venial sins, while malicious lies are mortal sins.

A person can not lie as soon as he or she can speak. The most commonly cited milestone, what is known as Machiavellian intelligence, is at the age of about four and a half years, when children begin to be able to lie convincingly. Children are generally taught that lying is wrong and that they must never lie, in particlular not to their parents (because they are responsible for the child and must know the truth in all matters concerning the child). When a child is caught lying, reproof and/or punishment is usually given in response, to teach the child not to lie. In homes where spanking is practiced, lying will often be considered a spankable offense. Lying is also sometimes punished with mouthsoaping.

Young children learn from experience that stating an untruth can avoid punishment for misdeeds, before they develop the theory of mind necessary to understand why it works. In this stage of development, children will sometimes tell fantastic and unbelievable lies, because they lack the conceptual framework to judge whether a statement is believable or even to understand the concept of believability.

When children first learn how lying works, they lack the moral understanding of when to refrain from doing it. It takes years of watching people lie and the results of lies to develop a proper understanding. Propensity to lie varies greatly between children, some doing so habitually and others being habitually honest. Habits in this regard are likely to change into early adulthood.

Some view children as on the whole more prone to lie than adults. Others argue that the amount of lying stays the same, but adults lie about different things. Certainly adult lying tends to be more sophisticated. A lot of this judgment depends on whether one counts tactful untruths, social insincerity, political rhetoric, and other standard adult behaviors as lying.

Other reasons not to lie[edit]

Lying often requires further lying to avoid that the lie is detected. Sir Walter Scott's famous couplet "Oh, what a tangled web we weave / When first we practice to deceive!" describes this often difficult, and risky, procedure.

Refraining from lying also comes with the long-term gain from being regarded as trustworthy and/or ethical. "The Boy Who Cried Wolf" is a well-known example of how having a reputation of lying can harm oneself.

A lie detector is a hypothetical machine that can detect if a person is lying or speaking the truth.

Actual machines that approach such capabilities are polygraphs: instruments that measure physical signs of anxiety such as as blood pressure, pulse, respiration and skin conductivity while the subject is asked and answers a series of questions. The first polygraphs were built and tested around 1915, and the concept of lie detectors fascinated and frightened mankind a great deal.

Several comic strips and animated cartoons show fictional machines that are a combination of lie detectors and spanking machines: The subject is restrained in the machine and interrogated. As soon as he tells a lie, the machine spanks him. One Disney cartoon of the Big Bad Wolf and the Three Little Pigs even shows a machine that combines three functions: a lie detector, mouth washing, and spanking machine.

The humiliating punishment of a young adult caught lying to a parent, teacher or some other authority figure is a common scenario used in spanking videos. Examples include: