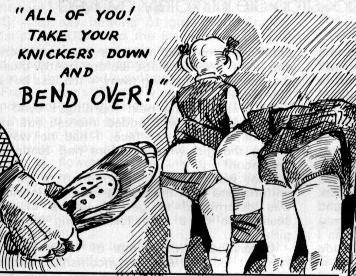 In the United Kingdom, Ireland and some fellow Commonwealth nations knickers is a word for women's undergarments (panties).

Knickers cover the bottom, crotch and legs of the wearer in differing amounts according to the style. Use is often made of colour and trimmings in styles intended to visible, though the vast majority worn are not intended to be seen, and are usually plainer and often less revealing.

A French "schoolgirl's" knickers are taken down for a spanking. From an adult pornographic film, c. 1925:

There are many different styles of knickers, among which are: