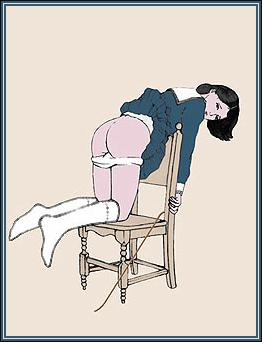 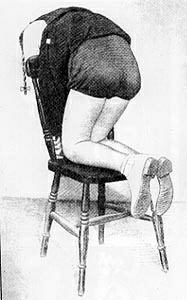 The kneeling-in-a-chair position is a spanking position in which the spankee kneels in a chair, armchair, or couch.

In the most common variant, the spankee kneels on the seat, facing the back of the chair and holding onto the back with his/her hands. This position brings the spankee's buttocks to a convenient height for spanking and stabilizes the position by means of the kneeling, compared to the standing position. If the seat of the chair is padded or equipped with a cushion, the position can be comfortable.

The position allows for some front/back movement of the buttocks (and clenching when moved forward), which can be seen as a disadvantage. The spanker can verbally instruct the spankee to stick his/her bottom out, or can hold the spankee around their waist in the right pose, similar to the underarm position.

The "kneeling in a chair" spanking position seems to have been particularly popular in early 20th century French spanking literature.

Depending on the making, size and height of the chair and its back, there are also variants of the position possible: