Externally hosted image on Handprints: Drawings Gallery #184
An F/f spanking with a swimming glove, by Arkham-insanity.

A glove is an item of clothing that covers the hand. Some are designed for purely practical purposes, such as leather work gloves or rubber dish-washing gloves that are worn for protection. Others, primarily for women, are decorative items that serve as a fashion accessory.

Gloves can be made from a wide variety of materials: knit wool, various types of fabric, lace, leather, rubber, PVC, latex, etc. 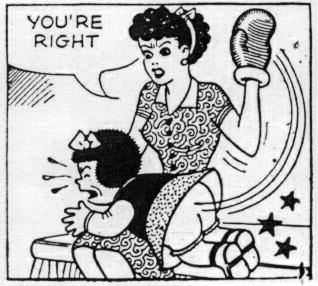 It is often wrongly thought that spanking wearing a glove, e.g. a thin or thick leather glove, would make the spanked bottom hurt more and the spanking hand hurt less. In fact, wearing a glove means less pain for both partners because the layer of material absorbs much of the impact. So the spanker will feel less, but also the spankee. Wearing a glove might "look dominant" but makes the spanking actually milder than a bare-hand-spanking.

In the eccentric 1988 British film Track 29, Sandra Bernhard is a nurse who regularly spanks Christopher Lloyd, who plays a perverted doctor, while wearing either rubber or leather gloves.

There are also scenarios where the bottom is made to wear gloves: