A desk is a kind of table used for writing and similar tasks, as opposed to a normal table which is mainly used for dining, and as opposed to a worktable or workbench which is used as a surface for any of various crafts not involving writing.

The top of a desk can be horizontal or slightly slanted. A desk often has various drawers below it, and may have paneling on the front and sides, making it convenient to sit close to the desk only from behind. (This is more common in an office or home desk, than in a student's school desk.)

Desks are used in schools, office workplaces and homes. 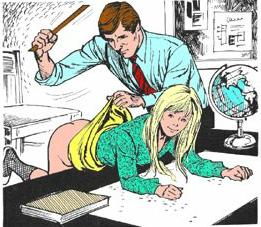 In a school spanking, it is not uncommon for a pupil or student to be laid over, or to hold onto a school desk (either a student's or the teacher's desk) to be spanked (see half-standing position and leaning position).

In domestic spanking stories, a common scene is for the delinquent to be called in to the den or office of the head of the household (often a father or husband), and made to bend over his (or her) desk for a spanking.

Different types of desk designs, from antique to modern, have been used for set decoration in spanking videos to invoke a feel of authenticity as well as nostalgia for the past. Below are a few examples from various time periods.