A carpet beater is an instrument used to beat the dust out of (area, not fitted) carpets. Carpet beaters come in different designs, but most look like a big fly swatter, made of thick wire, wicker, rattan or willow, designed to give whipping blows to chase out the dust without doing damage to the carpet. Smaller versions of the carpet beater, with fewer loops, and sometimes only a single loop, are known as rug beaters. In Japan, futon mattresses are cleaned with a uniquely shaped rattan "futon beater." These have also been featured in a number of spanking videos.

Before the vaccum cleaner appeared, carpet beaters were once found in practically every household that had a carpet or rug. Carpet beaters were used outdoors. Some houses still have frames for beating carpets in the courtyard or garden: The carpet is hung over the frame and beat, which makes a "whap whap" sound, and the wind takes away clouds of dust. In winter, the best way to clean a carpet is to place it upside down on an area of fresh clean snow and then beat it from the back. In continental Europe, carpet beaters are still in use today because a vacuum cleaner is not as effective in getting dust and dirt out of an (oriental) carpet as a vaccum cleaner. For some unknown reason, carpet beaters seem less common in the anglosphere than in continental Europe. 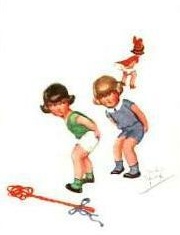 The design of carpet beaters made the implement also popular for corporal punishment. The carpet beater served in a similar way to "beat the dust out of the pants" of naughty children. When the carpet beater is swung not too hard, the punishment looks impressive but actually is not too painful, especially when used on the seat of the pants only. But when it applied really hard, and on the bare buttocks, it does a lot of pain and damage.

The use of carpet beaters as a punishment implement is prevalent in the Netherlands, Germany and Italy. It is/was common to have the carpet beater hang from the wall outside or in the corridor.

The following excerpt is from a Dutchman, born in 1923 and writing for his grandchildren about life as a child before the war:

"When I was seven, I ruined my new shoes by playing soccer. New leather shoes were expensive, and I had to go on wearing them. Coming back from school, I had thrown them in the canal in a fit of anger. Now they HAD to buy me new shoes.

I had to get the carpet beater, which hung outside to keep it supple. Knowing the carpet beater from mama, I was not terribly afraid. But I had to hand the carpet beater to daddy, not to mama, and it was daddy who took me in the kitchen, and ordered to lower my shorts. I never had to do this before.

I got seven, the maximum (one per year). He took me firmly by my arm, and swung the carpet beater against my seat. At the first stroke, my whole seat was burning. The next one, covering burning skin, was a lot worse. From the third, the pain was unspeakable. You instinctively tried to back away, which made it worse as it allowed for a better swing. I felt the burning till I fell asleep. Till two or three days after, I could feel I was spanked badly when sitting down. I remembered it for the rest of my youth.

You boasted about having had the carpet beater on the bare from your father, as it gave you high status as a tough boy. But you didn’t care to repeat the experience: mentioning the carpet beater was enough to make most boys behave."

In the Ingmar Bergman film, Fanny and Alexander (1983), a sadistic minister thrashes his adopted son with a carpet beater. Below is a selection of adult spanking-fetish films that also feature this implement.