Tough but flexible birches made from the North American sassafras tree. 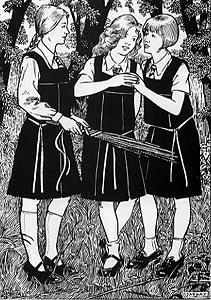 Birch is the name of any tree of the genus Betula. These are generally small to medium-size trees or shrubs, mostly of northern temperate climates.

The spanking implement called birch or birch rod (see also rod) is a bundle of twigs cut from a tree, normally the birch tree. Freshly cut or dried out and with twigs and leaves removed, it has been long used as a means of corporal punishment called "birching".

In French, the implement is called verges (from the Latin virga). In German it is known as Birkenrute or just Rute (rod), in Dutch tuchtroede, in Russia rozgii (розги).

In England the silver birch was commonly identified with the female gender in the nineteenth century and was sometimes referred to as "Lady Birch."

In the UK birching was an available legal punishment until 1948, and has been retained as such by the Isle of Man till 1975, as the European Court of Human Rights declared it a "cruel and unusual punishment".

A normal birch used on children was small, light and no more than a handful of short birch twigs; it stung a great deal at the time and left little marks. It was regarded as a safe and mild implement, generally used OTK, although loathed by children for its stinging properties. As children grew up, the twigs chosen became longer and heavier.

The birch was kept in many homes in Western and Northern Europe till the second world war, although its use was declining. In the twenties, it was a rare punishment reserved for serious misdeeds only. Turn of the century European children’s picture books often contain images of a birch rod.

The birch was replaced by the cane at school in Victorian England in the name of modesty, since the spankee needs to be bare bottomed for a birching: birch rods are only painful if used on the bare skin. In the British Upper Class this was (and still is) considered indecent.

True birch twigs are very flexible, knotty and gnarled. For judicial corporal punishment, the executioner would use the heavy birch like a whip, drawing the twigs over the skin. The knots and gnarls, whipped in the skin, will cut it and make the blood flow. It was considered a mild, but degrading judicial punishment often reserved for children and women, particularly “prostitutes” (being pregnant without a man claiming paternity was enough to qualify). In the “Low Lands” (Netherlands, Belgium, Low Germany) a typical punishment for “whoring” consisted in “being stripped to the skin and whipped forty times with a sharp birch till the blood is flowing”. It was executed in public at the whipping pole on the market square that can still be found back in many places there.

Many historical pictures and paintings are to be found on the net.

The pain produced by a birch begins surprisingly mild but increases cumulatively with the number of strokes. The birching will first leave a criss-cross of thin red lines and dots and slight grazes on the skin. If these are hit again, the pain will intensify till a very wicked stinging over a large surface.

Part of its popularity came undoubtedly from the wide range of sensations a birch could provide: from a mild punishment given to a naughty toddler to a severe flogging of a rebellious adolescent.

A birch can be made from freshly cut birch twigs, as described in the Birch-making tutorial. If they could not be cut fresh from trees, birch rods were also sometimes made from the twigs of birch brooms (besoms). The besom was taken apart and the twigs that were most suitable for the job were selected to make a rod. This method is described for example in the Victorian spanking novel The Mysteries of Verbena House:

Birches can be soaked in water or brine before use, which adds to their sting and durability. If a birch is stored for a longer time in a dry place, it will become brittle. One can try to make it supple again by soaking it for a couple of hours (e.g in a bathtub or a big bucket), but it won't become as good as a fresh one. If the birch is stored in a wet or humid climate (e.g. outdoors) for a longer time, it will rot and become even more brittle. The best thing is to make a birch from freshly cut twigs when it's going to be used, and throw away the remains after use.

Historically, birches used to administer formal corporal punishment, both judicial and in institutions such as schools, reformatories and prisons, were soaked for a long period (at least two weeks) in heavily salted water (i.e. a strong brine solution) before use. There were three main reasons for this. Firstly, it greatly increased the weight, flexibility and strength of the twigs. This made the punishments much more severe in terms of both pain, and damage to the recipient’s flesh in terms of cuts, weals and wounds. Secondly, a birch well soaked in brine was much more durable, and could be good for more than one flogging, perhaps up to three or four. Thirdly, brine has strong antiseptic properties, which helped prevent infection in the wounds following the punishment. Also, by re-soaking the birch in the brine barrel between floggings of different delinquents, the chance of cross infection was reduced, as the birch was effectively disinfected between floggings. This was especially important, considering that most judicial birchings of adult men, and all judicial and school birchings of boys and adolescents, were administered to the anal region, and that after the flogging, the birch twigs would be covered with blood.

A birch would sometimes be kept where it was well visible (as a warning) and in quick reach when needed, such as with its handle jammed behind a mirror or painting on the wall. It also was sometimes hung by a string. Examples in historic images:

Great virtues have I,
There's none can deny,
And to this I shall mention an odd one;
When apply'd to the tail,
'Tis seldom I fail
To make a good boy of a bad one.

Some German-language web shops offer birch rods for Christmas, called "Nikolausrute" or "Nikolaus-Rute" in German (see that article for example links). These are typically sold "for decoration purposes" and may not be too good for actual use if they were cut too long ago and have become dry and brittle.