Difference between revisions of "Drop-seat pajamas" 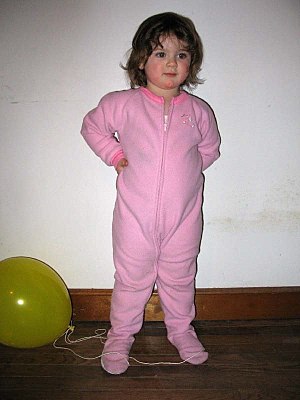 A two year old in a blanket sleeper.

Drop-seat pajamas, also known as blanket sleepers, footed pajamas or Dr. Denton's, are a warm and comfortable one-piece sleeping garment with long sleeves and legs, sometimes with attached booties, commonly worn by infants and young children in the United States and Canada.

Drop-seat (also known as trap door or butt flap) refers to a flap at the buttocks that allows opening without undressing the garment. Traditionally the drop-seat closes with buttons, but modern versions often replace the buttons with snap fasteners. The drop-seat feature is designed to allow the person to use the toilet without removing the sleeper. However it is also convenient for parents and other persons of authority (e.g. grandparents or babysitters) to give the wearer, when such punishment is felt necessary, a bare bottom spanking.

For this reason, drop-seat pajamas are also spanking clothing and fetish clothing for spankophiles and sold in web shops such as Bobbie's DropSeats.

Drop-seats are also found in some long johns.

Several small businesses manufacture blanket sleepers on a small scale, and market them on the web. A list of these follows. (Note that some of these businesses cater specifically to people with sexual paraphilias, and may contain content that some people may find disturbing or offensive.)

This article is a stub. You can help the Spanking Art wiki by expanding it.
Retrieved from "https://spankingart.org/index.php?title=Drop-seat_pajamas&oldid=25157"
Categories: