Victory Girl and Her Liberty Belles is a retro-style superheroine created by Gauis Marius and initially published through the now-defunct Glory Bee Egroup. The fourth of GM's comic strip pastiches, Victory Girl is a tribute to 1940s patriotic superheroes (such as Captain America, Minute Man, The Shield et al), borrowing conventions of the so-called golden age of comics. Stories take place within a World War 2 setting, pitting Victory Girl against a rogues gallery of 'Japanazi' saboteurs (often thinly-veiled parodies of well-known comic villains like the Red Skull, The Claw, Fu Manchu or even Hitler himself).

As corporal imagery was prevalent in wartime propaganda, spanking plays a prominent role in Victory Girl plotlines, usually as the closing 'gag' to any given story. Following the visual practices of the wartime era, little girls in the strip were spanked over the knee and on the panties, usually by adult males or females. In common with GM's earlier characters (Selina and Miho-Chan), Victory Girl was provided with a faux history providing fictitious publication dates and similar 'production details'). 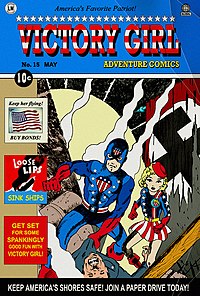 Several months prior to America's entry into World War 2, ten year-old Victoria Kirby is adopted by her uncle, Captain Simon Kirby, after her parents die in suspicious circumstances. Captain Kirby is the CO of a USO company currently stationed in Washington; using his military connections he arranges for Victoria to join the company as a tap dancer. There she makes friends with fellow performers Pixie and Trixie Bell, a pair of 'vaudeville brats' billed as "The Liberty Belles". All three girls are placed under the supervision of W.A.C. Lieutenant Betsy Ross, a former school teacher responsible for educating the Company's children. All five constitute a 'showbiz family' of sorts, with Capt. Kirby and Lt. Betsy acting as mother and father to the three girls.

On the eve of Pearl Harbor, Victoria has a dream where she meets Uncle Sam and Lady Liberty, who warn her that the United States will soon be at war. Due to her great courage and purity, Victoria will be granted vast powers to battle the enemy, along with the indomitable spirit which has made America the greatest nation on Earth: "You will be our special champion, protector of the weak, defender of the helpless, and keeper of the eternal flame of justice." Upon awakening, Victoria imagines it was all a dream, but soon discovers that she becomes superhumanly powerful whenever she sings the "The Star Spangled Banner" due to the patriotic feelings the song awakens in her.

Donning a costume based on the American flag, Vicki sets out to solve the mystery of her parent's murder, which she traces back to a Nazi sabotage ring operating out of Washington. Aided by her friends Pixie and Trixie, she succeeds in bringing the spies to justice, foiling an attempt to blow up the White House in the process. The three girls also meet up with the great American superhero Major Triumph, who was working on the same case. Although he doesn't approve of little girls taking such risks, he nicknames the trio 'Victory Girl and her Liberty Belles'.

Unfortunately for Vicki, her 'vast powers' only last an hour. When she and her friends attempt to sneak back onto base, they are caught by the MPs and handed over to Lt. Betsy for being AWOL. As Captain Kirby was called away on urgent business earlier in the evening, Betsy decides to give each of the girls a good, smart spanking on the panties (thereby setting the pattern for all subsequent storylines). Following a long and extremely thorough brush tailing, the three wailing girls are sent to bed rubbing their bottoms, Betsy warning them to expect a REAL spanking when Captain Kirby returns to base in the morning.

Victory girl and her Liberty Bells storm another Japanazi stronghold.

Victoria Kirby/Victory Girl: Vicki Kirby, also known as 'The Tap-Dancing Sensation of Washington Heights" is the star performer of a USO review touring US army bases in Europe and America. A ten year-old girl with a strong resemblance to Shirley Temple, she is granted superhuman powers to fight the Axis after her parents are murdered by Nazi saboteurs. Her powers are triggered by the American national anthem and last for about an hour, although this period increases with each passing year. She has a passionate love for freedom and justice and an equally burning hatred for oppression and tyranny, making the Nazis her hereditary enemies. As her abilities are fueled by faith in the national spirit, her power redoubles with each American victory until she is virtually indestructible by the end of the war. In 1945, she is reported missing in action and presumed dead by everybody, including her uncle, Capt. Simon Kirby. It later turns out that she became one with the national spirit, and took her place beside Uncle Sam and Lady Liberty as the incarnation of America Triumphant.

Pixie and Trixie Bell: Vicki's dancing partners, known as the 'Liberty Belles'. Originally part of a world-famous vaudeville family, they found themselves orphaned after their parents were arrested by the Nazis on charges of espionage during a tour of Europe. Eventually finding their way to the American Embassy in Berlin, they were sent stateside and placed in the care of a distant relative, Lieutenant Betsy Ross of the USO. After discovering Victoria's secret, they decide to join her crusade against the Axis, accompanying her on the majority of her missions. Both are high spirited and streetwise; Pixie is somewhat more mischievous than Trixie, frequently playing jokes on the soldiers at their base. Highly trained acrobats, they are formidable opponents despite their youth, having studied self-defence and firearms under Capt. Kirby.

Captain Simon Kirby/Major Triumph: Vikki's uncle and legal guardian, a Captain in the US army, currently serving as commanding officer in a travelling USO company. The posting is actually a cover: Kirby is in reality a covert operative working under the codename "Major Triumph". Like his prececessor Captain America, Triumph, is the product of advanced scientific experimentation, having had his strength, speed and agility boosted to superhuman levels. Unlike Victory Girl, his powers are permanent, meaning that he's a 'super-soldier' all of the time. His primary mission is to hunt down spies, saboteurs, and other threats to national security, initially working from Washington DC, then moving on to the European theatre after 1941. Kirby is unaware that his niece is actually Victory Girl, although he frequently comments on their uncanny similarity. He is the archetype Golden Age superhero: utterly flawless in every respect.

Lieutenant Betsy Ross: Women's Army Core officer, functions as a teacher and den mother to the Company's children. Typical 1940s blond bonbshell in a tight fitting uniform; smart, good-natured and highly efficient at her job. Treats Vicki and the Bells like younger sisters, and is always prepared to paddle their bottoms if they get out of line (especially if Capt. Kirby isn't around at the time). Brave, pucky and highly intelligent, she was trained in hand-to-hand combat by her father, war hero 'Howling' Sherman Ross, USMC. Frequently kidnapped by Japanazi spies, she usually finds herself bound and gagged to an explosive device waiting for Victory and Triumph to come rescue her. Completely unaware that Capt. Kirby and his precocious neice are actually world-famous superheroes, is secretly in love with Major Triumph, due to his innumerable rescues.