A teddy bear is a soft toy (also known as stuffed animal or plushie) in the form of a bear, perhaps the best-known of all. Named after U.S. president Theodore "Teddy" Roosevelt, the teddy bear became an iconic children's toy, celebrated in story, song, and film.

In spanking art and culture[edit] 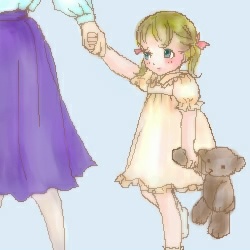 Teddy bears are popular props in ageplay, from adult baby to schoolie play ages, and for both genders.

Occasionally, teddy bears feature in adult art in dominant roles, such as that of a male in sex scenes, or that of a spanker in spanking scenes.

The following series of rendered spanking art by CopyKats features a spankophile child dreaming about her teddy at night: