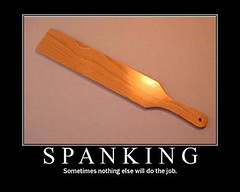 Externally hosted image on flickr
Spanking: Sometimes Nothing Else Will Do The Job. "Motivational poster".

A paddle is a spanking implement that roughly resembles a paddle used for rowing and canoeing, only smaller, flatter, and with a shorter handle. Spanking with a paddle is known as paddling; it is the most common type of corporal punishment in U.S. schools.

It is usually made of a rectangular wooden board with rounded edges and two cutaways to form a handle by which it can be swung. The paddle may be the only spanking implement commonly left on public display, i.e., the emblematic Greek paddles that decorate the walls of most college fraternity and sorority houses.

In French, a paddle is called tapette. In German, there is no traditional word for this spanking implement, but contemporary spankophiles and (web) shops sometimes call it Paddel, which is a literal translation of the English word paddle.

Paddles can also be round, oval, heart-shaped or in the shape of a hand. Some spanking paddles are based on recreational items such as the ping-pong paddle and paddleball design.

The Spencer paddle has holes drilled through the hitting end which increases the force of the impact by reducing its wind resistance.

Variants of non-wood materials include leather and plastic paddles, among others.

There are also spanking paddles without a handle (short boards) to be strapped to the hand (Spanking Buddy).

Independent sources confirming the existence of an implement of this name or design in Germany or other parts of Europe have not yet been found.

With the innovations in modern material science, new, high impact plastics are being used to make spanking paddles that are resilient and artistic. The first purveyor of these paddles was AZLicks, a company created by a Mechanical Engineer with a penchant for art and science.

With the saturation of the spanking implement market, finding original or out-of-the-ordinary Spanking tools had proven difficult. The introduction of highly customizable, clear, plastic implements may prove to be a new niche for the market.

Several homemade wooden paddles get a workout in "Punished Schoolgirl" (a video by Jameslovebirch).

For safety reasons, all edges of a paddle should be well rounded and the surface should be smooth and without any splinters. There are many companies in the U.S. that sell spanking paddles (see below), however it is not difficult to make a paddle yourself. You can follow e.g. these working steps:

Sometimes paddles are lettered with a humorous slogan or poem related to spanking. Examples of paddle slogans are:

Examples of paddle rhymes are:

Two examples of longer paddle poems (hosted on Handprints) are here and here. And here is another longer example.