Example of spanking art rendered with DAZ Studio, by Salalo (2013).

DAZ Studio is a 3D figure rendering/animation application by DAZ 3D Inc. It is compatible with most files intended for use by Poser. Unlike Poser, DAZ Studio is available free of charge (registration required).

DAZ Studio was created as a direct alternative to Poser, but following a different business model.

Poser provides a large set of components, not all essential to the creation of imagery, in a commercially available programme. DAZ Studio provides a core free of charge program with the required features for the creation of imagery, while relegating other features to add-on 'plug-ins', usually commercially available, which the user may add as required. Some users hold that this means that DAZ Studio is incomplete in comparison to Poser, others that it allows users to tailor the tool to their individual needs as their use of it evolves.

DAZ Studio is capable of importing most Poser content, with the notable exceptions of dynamic clothing and dynamic hair. As a result of the different lighting models, lights may need to be tweaked or replaced and while textures are generally usable between the two (other than Poser node-based materials), optimum results may need slightly different lighting values for each.

In 2004, DAZ 3D bought the landscape rendering software Bryce from Corel. In 2005 they released Bryce 5.5 with a plugin to integrate content from Poser/DAZ Studio directly into Bryce. In 2007, DAZ re-released Bryce 5.5 as a freeware. 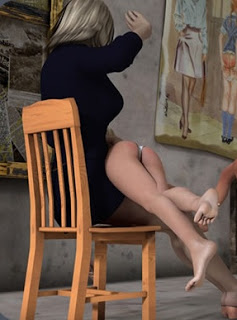 Listed here are some of DAZ's figures (characters). There are far too many to list every figure DAZ has produced. These are just the primary ones for which a wide variety of support items are available.