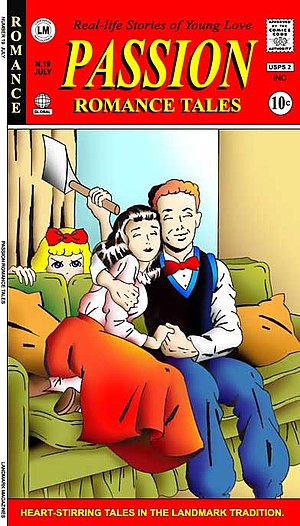 Carrie Madison, aka Daisy Miller, was a supporting character in the Glory Bee comic strip; the occasional girlfriend of Harry Doolin and later a home economics teacher at Everdale High. Originally devised as the quintessential homecoming queen, she has gone through several different incarnations as a cheerleader, gymnast, showgirl, fashion model and career woman.

Daisy Miller debuted as Harry Doolin's girlfriend in issue 2 of Holy Moley! Comics (Goldman Periodicals, Mar-Apr 1941). Due to an ongoing legal battle between Goldman and its competitor, Anville Press, the character was dropped from the strip the same year, returning under the name Carrie Madison in 1942. Awarded her own feature in 1945, Carrie was redesigned as a showgirl similar to Timely's Mollie the Middle, running in her own title until the Comics Code Controversy of 1954.

The character was then published by Landmark Magazines from 1955-1966. Returning in the company's teen romance title Passion, she quickly became the star of her own teen comedy series, which lasted until the mid-sixties. When superheroes started dominating the field, the character was revived to play supporting roles in Victory Girl and Selina the Moon Maiden.

Carrie Madison is an open source character designed for use by anyone. Author citation is not necessary.