A boarding school is an educational institution where some or all pupils not only study, but also live, amongst their peers. The word 'boarding' in this sense means to provide food and lodging.

Many public schools in the Commonwealth of Nations and private schools in the US are boarding schools. The amount of time one spends in boarding school varies considerably from one year to twelve or more years. Boarding school pupils may spend the majority of their childhood and adolescent life away from their parents, although pupils return home during the holidays.

Pupils may be sent to boarding schools at any ages up to eighteen.

Dormitory of a 19th century boarding school in Germany

A typical modern fee-charging boarding school has several separate residential houses, and in various streets in the neighbourhood of the school; Others will have dormitories on the school grounds itself if this was a feature of the school from it's beginning. Pupils generally need permission to go outside defined school bounds; they may be allowed to venture further at certain times.

A number of senior teaching staff are appointed as housemasters or housemistresses, each of whom takes quasi-parental responsibility for some 50 pupils resident in their house, at all times but particularly outside school hours. Each may be assisted in the domestic management of the house by a housekeeper often known as matron, and by a house tutor for academic matters, often providing staff of each gender. Nevertheless, older pupils are often unsupervised by staff, and a system of monitors or prefects gives limited authority to senior pupils. The matron is a female member of the staff that works along the housemaster and other colleagues. She secures the health and welfare of the students, subsuming the role of a school nurse.

A common daily event at a boarding school is prep. Prep, as typical, is short from preparatory but in this context refers to homework or preparing for the next school day. Prep is typically last at least an hour and is mandatory for all students, and all but the most senior students typically supersized by staff where a strict silence is maintained and make sure the students complete there work. 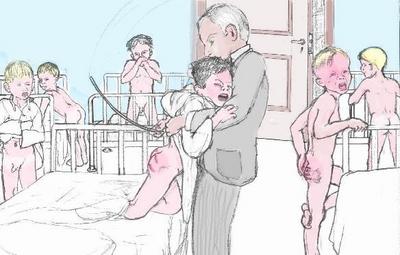 A group caning (bare bottomed) of boys in a dormitory. Drawing by Professor Jim.

Boarding schools have a reputation of enforcing a system of strict rules; stricter than those typically found in a family home. These institutions are often environments where the phrase "it's better to ask forgiveness than permission" is wrong. They have a strict enforcement when rules are broken, but it is comparatively easy to get exceptions if asked for ahead of time, as many rules are mostly there because the staff can't give as much direct supervision as a parent could give.

Boarding schools and their surrounding settings and situations have become almost a genre in (mostly) British literature with its own identifiable conventions. (Typically, protagonists find themselves occasionally having to break school rules for honourable reasons which the reader can identify with, and might get severely punished when caught - but usually they do not embark on a total rebellion against the school as a system.)