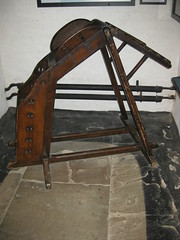 Externally hosted image on flickr
Birching stool with an adjustable foot step for boys of all ages.

The terms birching pony, birching stool or whipping stool refer to items of spanking furniture that were used in British correctional institutions for corporal punishment. In these, the delinquent was standing with their feet on the floor or on a height-adjustible step, bent forward at an obtuse angle in a half-standing position. The item is thus different from a four-legged birching horse and also different from flogging triangles and A-frames and caning trestles. Similar items are also found in Australia.

The offender was restrained to the item and the punishment was applied to their buttocks, typically with a birch, perhaps in some cases also with a cane. The birchings were always given on the bare buttocks.

Today, examples of this item of judicial corporal punishment furniture can be found in museums.

Some examples have an arced shape and are "three-legged". The offender's legs were parted by the vertical part of the "pony", with their feet placed to the left and right of the base. These were, perhaps, inspired by the horsed position.

Other variants have different individual designs and the offender's legs were not necessarily parted.