An anthropomorphic dog spanks puppies in the chicken run with a switch. 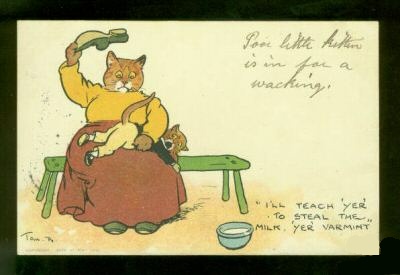 An anthropomorphic animal (or anthro for short) is a fictional animal that has been given human traits. Sometimes this is only as much as speech and advanced rational thought (e.g. Charlotte's Web), sometimes its as much as walking upright, wearing clothes, and possession of thumbs. These types of beings are often used in children's literature, cartoons, fantasy and science fiction.

Anthropomorphic animals spanking each other (in typical roles such as "parent-child" or "teacher-pupil") are found in artwork several hundred years old. Since the early 20th century we also find it in the new art forms of comics and animated cartoons.

Lycanthropes (or "lycan" for short), or werewolves, are humans with the ability to shapeshift into wolves. Sometimes a lycanthrope possesses the power to shift into a hybrid form. Lycanthrope is also sometimes used to refer to a human who can shapeshift into any animal, though lycan (Greek for "wolf") makes its use inaccurate. Typicality depicted as an infection curse transmitted via bite so some games like Dungeons and Dragons limit it only to carnivorous species. Sometimes the more accurate "zooanthrope" is used instead.

Lycanthropes are a kind of anthro.